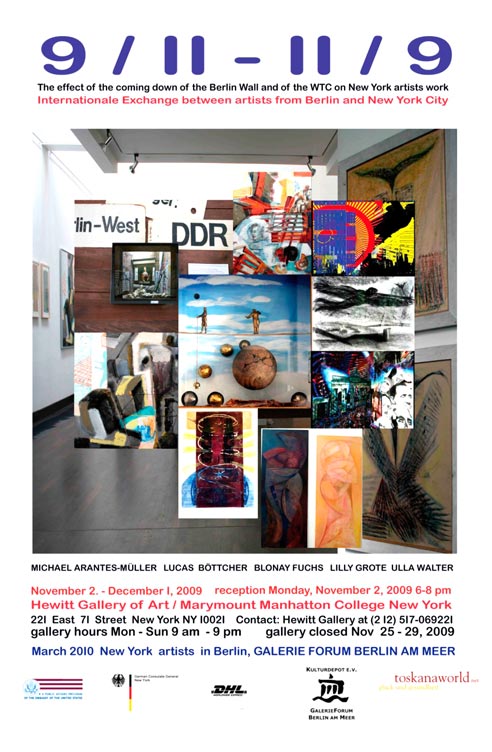 Artist Exchange International and Marymount Manhattan College present
“11/9-9/11” (2 November -1 December 2009), an exhibition in the Hewitt Art
galleries of Marymount Manhattan College (221 East 71st Street, New York,
NY, 10021). The exhibition opens to the public on 2 November (6:00-8:00
pm). Marymount will host a panel discussion with the artists, led by the
art critic and curator Lilly Wei, on 3 November, 6:30-8:00 pm, in the
Regina Peruggi Room (2nd floor of Main).
“11/9-9/11” both juxtaposes and likens the fall of the Berlin Wall (on 9
November 1989) and the destruction of the World Trade Center (on 11
September 2001). The presentation of work at Marymount corresponds with
the twentieth anniversary of the dismantling of the Berlin Wall, and
showcases work by six Berlin artists who have been inspired by that
landmark event.
“11/9-9/11” is the first of two exhibitions on this theme.  The second
will take place in April 2010 at the Galerie am Meer in Berlin, and will
feature five American artists.

“11/9-9/11” contains work by the following German artists:
Lilly Grote and Blonay Fuchs are from the former West Berlin. Grote works
with boxes allowing us to peer into small isolated worlds, not unlike the
formerly divided Berlin. In Beta, a post 1989 work, a tightrope walker
crosses the cosmos; we feel on the one hand exhilarated and on the other
precarious and exposed. In a series of 8 works on paper, Fuchs shows us
fantasies of New York and Berlin. Highly expressive and abstracted imagery
reproduce the energy of both cities and call to our attention the
similarities between the two.

Ulla Walter and Michael Arantes Müller are from former East Berlin.
Walter’s Last Exit is an oppressive image of the last escape, the impact
that major structures, like the Berlin Wall or the World Trade Center have
on the world.  Last Exit forces us to come face to face with the wall, but
then enables us to pass through it.  Müller’s Flydream creates a
chronological story using a progression of media – from expressive
charcoal (before the fall) to hard, violent etchings (during) and then
finally opening out to woodblock (after) portraying a more colorful,
hopeful future.

Lucas Boettcher was 19 when the wall came down. He had the advantage of
coming of age in an undivided Germany. His work deeply reflects the
aftershocks of the Berlin Wall and the Twin Towers. He is able to step
back and look from afar, the events mythologized through his eyes in a
comic book style video.

The fall of the Berlin Wall not only established the end of the socialist
experiment in eastern Germany it also gave rise to a full range of
evolutionary changes throughout Europe. The exuberance of the destruction
of the Wall led to the reunification of Germany and to an era of renewed
hope and optimism. The unexpected and dramatic destruction of the World
Trade Center, however, suspended this sense of global optimism.
Ultimately, both Berlin and New York became the epicenters of seismic
cultural and political transformations. The works of art in “11/9-9/11”
and those in the kindred Berlin exhibition are intended to generate
conversations about the state of the two cities today and how two events
that permanently marked their histories resonate with one another.